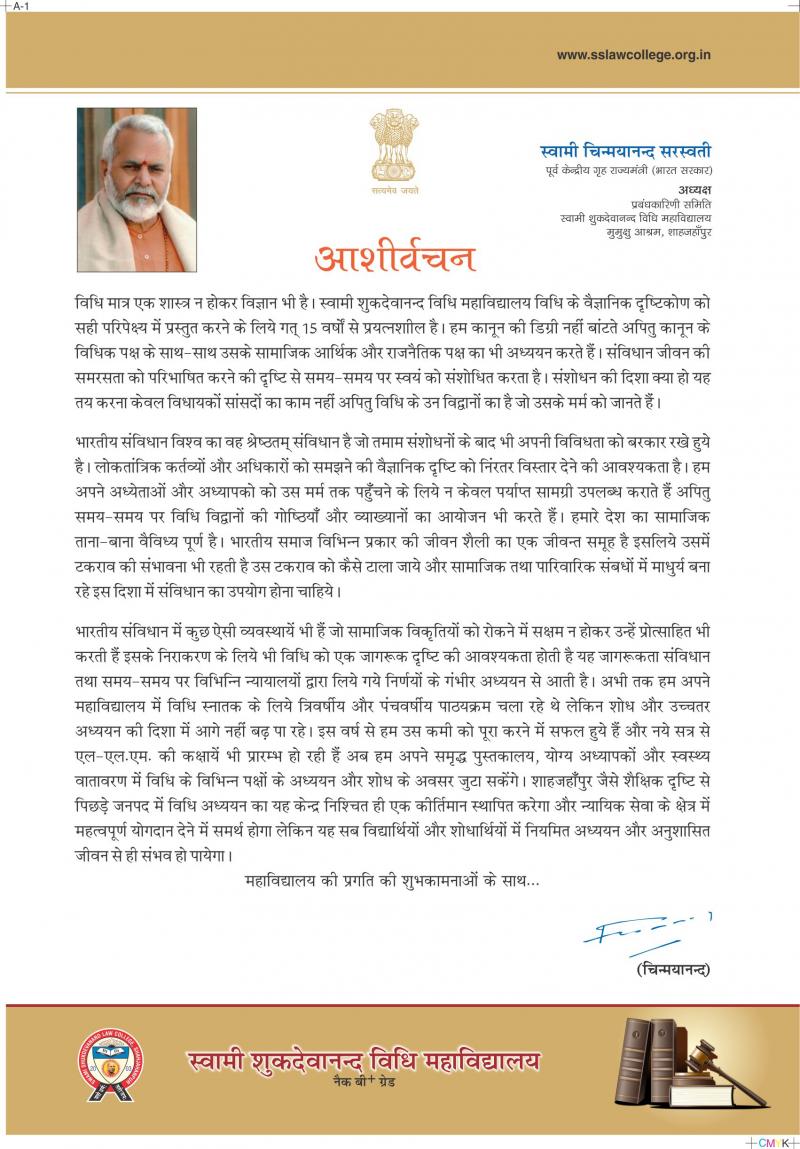 Whereas, it is necessary to adopt and implement the revised curriculum and rules formulated by the Bar Council of India, MJP Rohilkhand University, Bareilly, hereby adopts LLB Three Years (Six Semester) Degree Course of study and frames the following general rules for the implementation from the academic year 2009-10 onwards.

Admission to LLLB first semester will be made strictly on the basis of the merit list prepared according to the percentage of the marks obtained by candidates in the qualifying examination plus the weightage, if any, for which the candidate may be entitled as per University rules. The percentage will be calculated up to three figures after decimal point.

If the marks obtained at the intermediate or equivalent examination by two or more candidates are the same, in that case the candidates senior in age will get preference in the merit list.

ii. Reservation and weightage shall be as per University Rules.

2. It has been observed in previous years that a lot of time is wasted in the process of entrance examination and counselling, and most of the seats in various affiliated colleges could not be filled by the university; hence, this system is of no utility in such circumstances.

3. A significant majority of candidates, who apply for admission to this course are graduates from the Mahatma Jyotiba Phule University; so we can rely on the examination results of the same university.

4. Prohibition to register for two regular courses of study

Bar Council India has recommended for maximum age on admission to LLB Course; however, these are only recommendatory and not mandatory. Since MJP Rohilkhand University is an affiliating University for LLB Course, the faculty board is of the view that maximum age bar is not feasible as of now. However, the Vice Chancellor, MJP Rohilkhand University may take final decision regarding age on admission keeping in view the recommendation provided in Schedule III Para @* of Bar Council India Rules of Legal Education after necessary deliberations.

No student of LLB programme shall be allowed to take the end semester examination if the students concerned has not attended minimum of 75% of the classes held as also the moot court exercise, tutorials and practicals conducted in the subject taken together.

Provided that if a student for any exceptional reasons failed to attend any of the classes held in any subject, the principal of the College may allow the student after approval from Vice Chancellor of MJP Rohilkhand University, if he/sheattended at least 66% of the classes held.

The relevant UGC/BCI Rules (as amended from time to time) shall be binding on the University.

Rules for Promotion, Exemption, Back Paper, including Rules for Improvement, etc. to be effective from Session 2009-10

8. Curriculum and Duration of Studies

1. The Three Year degree course in law, namely Bachelor of Laws (LLB) shall be divided in six semesters.

2. The curriculum of studies of the LLB Degree shall comprise of the courses set out hereinafter schedule A.

3. The course content of each paper of study shall be such as set out hereinafter schedule B.
Provided that the Board of Studies in Law may make such changes in content of the course of study as and when it deems it necessary and report the matter to the Faculty Board of Law for approval.

5. Each semester course shall be conducted in not less than 30 class hours per week, including tutorials, moot court, seminars, workshops and special lectures provided there shall be at least 24 lecture hours per week as prescribed by the Bar Council of India.

2. A candidate shall be examined in 20 compulsory and six optional theory papers and one paper on General English and Legal Language paper and four practical papers from first to sixth semester carrying 90 marks for each paper through written examination conducted by the University and 10 marks in each paper shall be of tutorial/written assignments.

4. The four compulsory practical papers as prescribed in III, IV, V and VI semesters carrying 100 marks shall be examined as prescribed in the contents of the papers by two examiners, of which one shall be internal and one external.

6. Grace Marks: A candidate may be given five marks as grace marks in individual paper or in aggregate, as the case may be, if these grace marks enable him to pass the examination of that semester.

However, for promotion to Fifth Semester, the candidate must clear all the papers of First, Second, Third and Fourth Semesters respectively.

No candidate shall be allowed to appear in an examination of any paper after the expiry of three consecutive attempts.

A candidate who has failed in more than two papers or/and has failed to obtain minimum 40% in aggregate shall be allowed to appear in the concerned semester.

A candidate who has failed in the examination but is ineligible for back paper facility may also be allowed to appear in the consecutive examination of the concerned semester.

A candidate will be allowed maximum of three consecutive chances to appear in a paper subject to the condition that he will have to clear the LLB (Three Year Course) in maximum of six years. If he fails to pass the examination during this period, he will be deemed to have abandoned the course and shall not be readmitted in these courses.

I. There shall be no readmission in the first, third and fifth semesters.

A candidate can reappear at the rate of one paper in each semester, as back paper, for improving his marks/division. But this facility will be available to those candidates only who pass the examination in one go and without availing the back paper facility. However, the inter-se merit of the candidate shall be determined on the basis of marks obtained in the first examination.

All disputes regarding interpretation of provision of these rules shall be referred to the Examination Committee of the University whose decision shall be final.